Integrative Pest Management: How we avoid toxic substances for pest control in the garden

Infestations are the result of monocropping and pesticides.-David Riley, UGA

When I talk to people about gardening sans synthetics, there is one question that crops up more than any other: What do you do about bugs?  Well, I’ll tell you.

First, why not use the old Sevin Dust?  The reasons are Legion.  When we attempt to kill all the insects in a space (because these “cides” kill the good guys, too), if some survive, like weeds, they are the ones who can take it or adapt to it.  So we try and kill everything but we are at best creating a vacuum and at worst helping to breed super-bugs.  This is the reason industrial ag keeps needing new pesticides approved and keeps trying to mix them in different ways.  Nature will win in the end.  I was taught in college that technology will always keep up and provide farmers the upper hand.  It simply isn’t true.

Then there is the stone cold fact that I tried to deny for over a decade: if it kills them, it isn’t good for you.  Whether it disrupts your endocrine system, kills the bacteria in your gut that literally keep you alive or does a number of other awful things as it builds up in your system, we are not designed to carry the toxic load we dump on ourselves.

Second, as I mentioned, you should know there are beneficial insects and there are pests.

Beneficials help you out in some way.  They may pollinate or eat those that are doing harm.

Pests harm your garden in some way.

According to Sally Jean Cunningham in Great Garden Companions, 95-99% of all insects are beneficial or harmless to human life and endeavours.

Insects are good!  I am known to say I do not trust eating anything an insect won’t touch.  (And plants are higher in antioxidants when they have to fight a bit and aren’t weakened by poor growing practices but that discussion is for another time.)

So the question we should be asking is how do we increase our beneficial insects and decrease the chance of a crop devastating infestation?

This is where Integrative Pest Management (IPM) principles come in.

If infestations are the result of an ecosystem out of whack, we should encourage balance and try to tip the scales in the favor of beneficial insects.

On our farm, IPM is a three prong approach.

Avoiding monocropping is critical, as is rotational planting.  If you plant potatoes in the same spot every year, guess who will catch on?  Insects that eat potatoes will catch on.  When their young emerge and see a fresh crop, they don’t have to put in any effort and you, my friend, have an infestation.  Three years is usually enough time before you replant in the same area.

Now, as I originally learned from Mr. Riley with UGA, insects have a time of year when their population explodes.  Sometimes you have wiggle room when it comes to when to grow crops, especially in long seasons like ours.  Try not to grow what they eat when they will be out in full force.  We do better growing pumpkins in the spring, ready to soap vine borers, than we do in the late summer when they are everywhere and there is no mild method that will control them.

This is my favorite defense.  We buy beneficial insects and release them in the garden.  Ladybugs are lovely.  The little buggers come in a sack.  You give them a dunk in some water and then put them in the fridge to hibernate until you need them.  Then you release them by the spoonful into the area with the bad guys.  Make sure there is water around for them when you wake them up.  Or you can just dump them all in your garden and watch them devour other insects.  We did that the first year but now I am more judicious about it.

Other really popular predators include Praying Mantids and Green Lacewings.

Keep in mind that common beneficials are indiscriminate killers so I wouldn’t layer a bunch of them in the same place or put them in an area where you already have good guys working for you.

Some other great examples of biological control are bats, birds and Dragonflies to control mosquitos or Fly Predators to control black flies.

Those guineas about which I complain (Larry, Curly and Moe or Larry, Darryl and Darryl, depending on how they are behaving) actually do a great job of insect control.

Why isn’t she mentioning us? Toads are superheros.

The most familiar to many people, this includes soaps (usually castile), oils (like neem or peppermint), abrasives (Diatomaceous earth or DE) and the dreaded hand picking.  I actually think the hunt-and-destroy method of hand picking that is employed when those big, fat, neon green caterpillars are on tomatoes is fun for my Mister and kids.  I find it horrifying.  The popping when you step on them is foul.  I’ve noticed they are called by about five names as I move around the US but the name doesn’t matter.  They can eat a tomato plant to a stump in under a day.

So there it is.  This is how we deal with unwanted insects in our garden.

One last thought.  You may lose a crop here and there.  We put out almost 30 different varieties of plants during peak seasons.  Some slip through the cracks, some are eaten by bugs and some just under perform.  When you put out a variety, you aren’t just protecting against bugs or making a nicer salad, you are hedging your bets.  Some stuff will fail.  It will be less of a loss if you have a lot of other stuff out there.  If you only grow pumpkins and have a bad year for vine borers, you just lost everything.  If pumpkins are one of many things in the garden, you’ll get by.

In Israel, where they manage to improve instead of degrade the land, they use beneficial insects on a larger scale.  This is finally starting to catch on with frustrated US farmers who have run out of synthetic options to control pest populations.

This small country, made of rock, desert and swamp exports produce.

BioBee is a great example of how to innovate with common sense. Here is their story.

Biological control guide from the USDA

Planet Natural has a good intro on this subject as well as being our source for purchasing beneficials.  The prices are right and the resources helpful.

I really enjoy listening to Angela Busby’s Healthy Living Podcast while I am in the garden.  I have learned a lot and been pushed into a lot of follow up research as a result.  She reminds me to notice my own health.  Busby Naturopathics is based in Brisbane but she consults via Skype for all of us on the other side of the planet.  She is currently giving away a copy of her E-book, The Hidden Cause of Food Cravings, so hurry!! 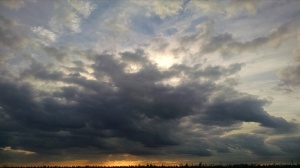 Love from the farm

8 thoughts on “Integrative Pest Management: How we avoid toxic substances for pest control in the garden”